RIT Capital Partners published a half-year report for early 2016, in which Jacob Rothschild, the chairman of RIT and the head of the Rothschild household of England, explains his investment view for 2016.

The greatest experiment in the history

Like other investors, Lord Rothschild’s preoccupation is the massive monetary stimulus ongoing all over the world.

The six months under review have seen central bankers continuing what is surely the greatest experiment in monetary policy in the history of the world. We are therefore in uncharted waters and it is impossible to predict the unintended consequences of very low interest rates, with some 30% of global government debt at negative yields, combined with quantitative easing on a massive scale.

He also mentions the contrast of the so far positive reaction in the financial markets and the unresponsive economic growth all over the world.

To date, at least in stock market terms, the policy has been successful with markets near their highs, while volatility on the whole has remained low. Nearly all classes of investment have been boosted by the rising monetary tide. Meanwhile, growth remains anaemic, with weak demand and deflation in many parts of the developed world.

Here he, too, mentions deflation, so did George Soros. Mr Soros said in Davos in January that we were repeating 2008 and, “The key issue is deflation.”

Then what would deflation bring to the market? Lord Rothschild explains RIT’s portfolio.

In the portfolio, the exposure to stocks has been steadily declining in the recent years.

As the percentage was about 30% amid the financial crisis in 2008, so the recent rate would not imply Lord Rothschild is too pessimistic about stocks, but it is gradually heading to the cautious level.

The strong dollar and gold

Instead of stocks, the fund increased its position in gold.

We increased gold and precious metals to 8% by the end of June.

Our significant US Dollar position has now been somewhat reduced as, following the Dollar’s rise, we saw interesting opportunities in other currencies as well as gold, the latter reflecting our concerns about monetary policy and ever declining real yields.

So this is Lord Rothschild’s investment strategy for the deflationary force in the global economy. The correlation between the gold price and real interest rates is obvious as in the following chart: 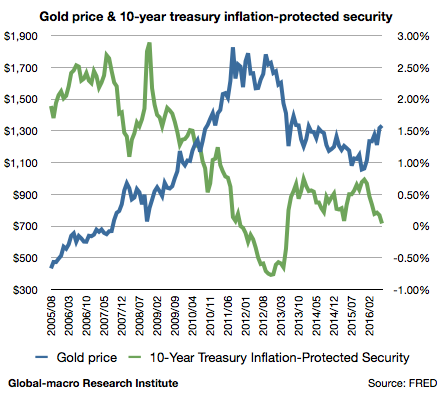 This view sympathizes with most of the great investors’ bearish view on the world economy. Dr Larry Summers, the former US Treasury Secretary, called it secular stagnation.

We also predicted the recent rise of the gold price in January.

The net asset value of the fund is steadily increasing. The following is the half-year growths of the fund in the recent years:

This is not as extravagant as what most hedge funds try to achieve, but it is significant that RIT Capital Partners is making a decent profit even during the rough time for stocks such as the last 12 months, reflecting RIT’s rather long-term objective. We will follow up how Lord Rothschild would handle the difficult, experimental scene of the global economy.