Donald Trump won the presidential election in 2016. Then the next question is: what does it mean to the financial markets? As Mr Trump plans to increase the federal debt to invest in infrastructure, the markets now expect high interest rates worldwide, but if you look at President Trump’s policies more carefully, you might assume something different could take place: rate cuts and QE.

Investors are now so optimistic about the US economy. We see interest rates surging, as investors expect inflation and growth. Indeed, President Trump’s policies including a debt increase, tax cuts and public investment are the only way to fight against the recent slow growth. Many famed economists called it ‘secular stagnation’, which means the recent slow growth is not just short-term but something much more persistent.

The secular stagnation hypothesis is posed by former Treasury Secretary Larry Summers and agreed by several star hedge fund managers such as Ray Dalio and Bill Gross. The evidence is that interest rates have been decreasing since 1980, in order to fight against the permanent slowdown of the economy. 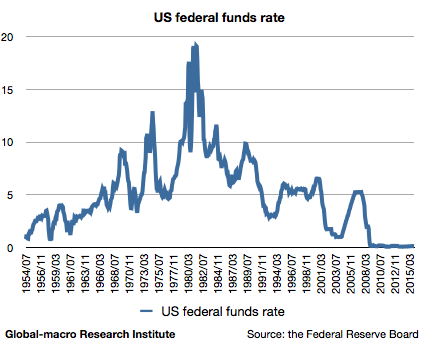 However, after Mr Trump’s win, the markets seem to have forgotten the hypothesis. Now long-term interest rates are surging, and the gold price has been falling. This means investors are now betting on growth and inflation.

So let us see if President Trump’s policies are actually what could fight against secular stagnation. In an interview with CNBC, Mr Trump said, “interest rates are so low”, and thus “this is the time to borrow, and borrow long term, so that we can have the money to rebuild our infrastructure” to stimulate the US economy. This is considered to be how to take advantage of the period of secular stagnation.

Yet the plan to “borrow long term” to invest in infrastructure is something we have heard before. It is exactly what Dr Summers insisted when he discussed secular stagnation in an interview with Equitable Growth.

He said, “this is a moment when the United States can borrow money at less than 3 percent for 30 years, in a currency we print ourselves”. How similar this is to what Mr Trump said! Yet the similarity does not end here.

Reading these comments, we experience a strong feeling of déjà vu. Dr Summers said, “has there ever been a better moment to fix LaGuardia or Kennedy Airport? It is crazy that at a moment like this, the United States has the lowest rate of federal infrastructure investment, relative to the economy, than we’ve had since 1947. And on a net basis—that is, taking into account depreciation—we’re essentially not investing at all”.

Perhaps you have already noticed that President Trump’s economic theory is exactly Dr Summers’s secular stagnation hypothesis, as we judge it from what we have heard from him. The economy is suffering from low growth and low inflation, but interest rates are also low, so it is the time to cut taxes and invest to stimulate the economy.

Then, the next question is obviously what he thinks of monetary policies. He has not yet talked openly about his monetary policies, which have been preoccupation of many investors. Will he allow the central bank to raise rates? Or will he cut rates? His policies are not yet published.

However, he at least discussed the danger of high interest rates. He said, “what’s going to happen when the rates eventually will go up, and you can’t borrow, you absolutely can’t borrow because it’s too expensive?  It would destroy our balance sheet, totally destroy the balance sheet”.

He also noted the risk of a financial bubble. Before the election, according to CNBC, he said the stock market is ‘a big bubble’ fostered by low rates, and “if rates go up, you’re going to see something that’s not pretty”. This is exactly what we have been insisting as the reverse of portfolio rebalancing by QE.

So the question is whether he would continue to lower interest rates artificially by rate cuts or QE, or allow interest rates to go up and the stock market to collapse. We also have to note that his policy of increasing the federal debt is the very thing that has caused the recent increase in long-term interest rates. With high rates, he could not even borrow money because if he borrows money, he has to pay the high interests.

So the rising interest rates would obstacle his economic plan in the two crucial ways: the higher interests to pay and the collapse of the stock market. Investors have not been caring about this, but will he really allow these risks to hinder his policies that are just about to take place?

So our conclusion is that the only strategy for him to make his policies economically possible is monetary easing such as rate cuts and QE. He has not talked about it, or perhaps he would not like the markets to lower rates before he officially becomes the President, but this is theoretically the only thing that is possible. We will continue to follow Mr Trump’s policies to review our hypothesis.