The easy market for investors supported by the Fed’s quantitative easing is already over, and now the question is merely when, not if, the asset bubble bursts in several markets. The assets in a bubble are stocks, bonds and the dollar.

The Fed has ended its QE programme and is now in a process of raising interest rates. Will the US stock market be okay? It can never be okay as the central bank has injected trillions of money and is now going to retrieve it, but the market is manifesting groundless optimism.

The greatest premise investors believe in is the strong US economy and thus the strong dollar. However, the time is near for the uptrend of the dollar to be fading out. Why, how, and when? We will explain it in this article.

END_OF_DOCUMENT_TOKEN_TO_BE_REPLACED

On 16-17 Sep, the Fed will hold the FOMC meeting with a possibility of a rate hike for the first time since the subprime mortgage crisis. The result will be published on the 17th.

Although we have already been writing about the Fed’s rate hike, we would like to summarize our opinions here. We regard the following 2 scenarios as highly likely: END_OF_DOCUMENT_TOKEN_TO_BE_REPLACED

Recently, the Fed seems quite hawkish and rushing to raise the interest rate. According to Reuters, Mr Lockhart, Atlanta Fed President, insisted the point of “lift off” is close.

Although the GDP growth remains to be over 2%, the speed of the growth is weakened, and the CPI is still far from their inflation target of 2%.

This means there are other reasons for the rate hike than just the economic recovery of the country. The Fed is actually getting pushed to raise the interest rate by some other fear: the reverse flow of the portfolio rebalancing.

END_OF_DOCUMENT_TOKEN_TO_BE_REPLACED

The ECB (European Central Bank) is expected to have a Governing Council meeting at 1:45pm CET, which has been keenly watched by investors since Mario Draghi, the governor of the ECB, mentioned the possibility of financial easing in this meeting. END_OF_DOCUMENT_TOKEN_TO_BE_REPLACED

Since Mario Draghi, the governor of the ECB, mentioned the possibility of financial easing next month, EUR/USD has been dropped from 1.40 to now around 1.36, although it could be too much to fall. END_OF_DOCUMENT_TOKEN_TO_BE_REPLACED

After Mario Draghi, the governor of European Central Bank (ECB), mentioned the possibility of financial easing started in the next meeting of the central bank, the speculation occurred also in the currency market following the European real estate stocks that had been already boosted for months. (See the article on Gecina.) EUR/USD is now traded at 1.37, falling down by more than 1%.

The news currently mostly tells about the negative interest rate, not the quantitative easing, but if the other methods couldn’t hinder the inflation rate from diminishing, the ECB would have no option but the QE. Therefore, in this article we estimate the due rate of EUR/USD after the QE. END_OF_DOCUMENT_TOKEN_TO_BE_REPLACED 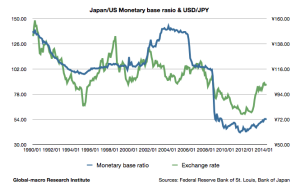 This is the graph of USD/JPY and the ratio of the two countries’ monetary bases since 1990. For a decade since 1995, the amount of the issued yen per a dollar had been around 100 with the exchange rate  being around ¥115, but then the Fed moved to financial easing according to the crisis in 2008. As a result, the ratio went down to around 50, which has still been the range until now as both of the central banks have been engaged in quantitative easing.

It is assumed that the monetary base ratio will resume to be 70-75 when the Fed totally stops the easing and the Bank of Japan finishes the QE of 2 years. The last time we observed that range of the ratio was from Oct to Nov in 2008, when the exchange rate was around ¥98.

To estimate the current due exchange rate from this, we need to consider that the foreign exchange market usually precedes the monetary base, and that in late 2008, the market was in a hurry to reflect the quantitative easing that would be held afterwards. We also need to note that according to the data by the IMF, the real economic growth of the US between 2008 and 2014 is estimated to be 9.2% whereas that of Japan is assumed to be merely 2.8%. Considering these, the current range of the exchange rate, ¥100-105 can be said to be quite appropriate, and due to the Japan’s trade deficit, which hasn’t decreased even with the weak yen, would lead the rate to be ¥105-110 in a middle or long-term.

In a short term, investors should be careful of the enormous short positions on the yen, which have been piled since late 2012, although the situation wouldn’t help the speculators demoralise the market, as few factors are seen to change the investors’ long-term view, and the additional QE is still possible if the inflation rate doesn’t increase. The investors would need to move in the Japanese stock market considering this moderate future of the currency market. After a fuss, with the speculators discouraged, the cheap and expensive stocks will just come to the due price, without causing any dominant trend in the Nikkei index.