The eurozone’s economy is at the edge of collapse. Southern European countries experienced a sovereign debt crisis in 2010, and the unemployment rate in the euro area is still as high as nearly 10%. Italy rejected Mr Renzi’s pro-EU reform plan in the referendum, and in France, the anti-EU National Front’s Ms Le Pen is increasingly popular.

Yet what is the cause? Whilst the EU also faces the immigration crisis, the economic reason will be easily comprehended by only glancing at the trade statistics of the eurozone countries.

The exchange rate and the balance of trade

In the floating exchange rate system, a country is able to stimulate its exports by devaluing its currency when it feels it is less competitive to other countries. If the currency is weaker, the foreign buyers regard the country’s products as cheaper, even if the prices in the local currency are the same.

Thus, before the euro was introduced, Italy, for example, was allowed to rely on financial easing to boost its exports if they felt they were not competitive enough, so that the Italian lira would become relatively weak to, for example, the German mark.

Yet now the eurozone countries have the same currency. Then, is the common exchange rate as weak as the lira, or as strong as the mark? In this sense, the exchange rate of the euro is conceptually somewhat average of the member countries’ exchange rates.

The curse of the ‘average’ euro

It was the cause. The ‘average’ euro, which contains the gigantic German economy in it, has naturally become much stronger than the Italian lira. As a result, after joining the eurozone in 1998, the Italian exporters suffered from the strong currency, leading to the eventual trade deficit. The following is the graph of Italy’s net exports to the GDP: 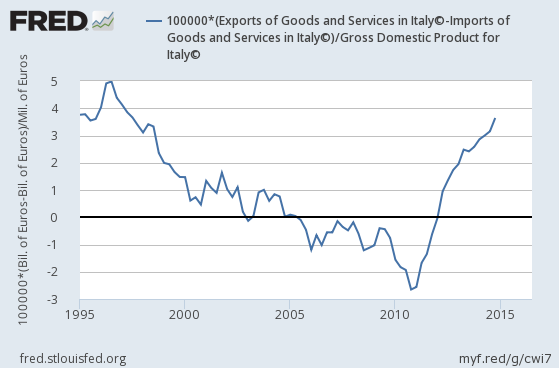 The suffering had lasted more than a decade until the ECB (European Central Bank) finally took action to save the weak economies after the European debt crisis happened in 2010, which was too late.

Unfortunately for Italy, the trade deficit was not only an issue for the exporters. Being unable to make money by exporting means that the Italian government cannot earn taxes from the exporters’ profits.

Consequently, the budget deficit of Italy rapidly worsened eventually to the debt crisis. As the readers might have already realized, the cause of the European debt crisis was not that Italians or the Greek were lazy, but it was about the currency.

The other member countries

It was not only Italy that suffered from the same cause. The Spanish trade deficit also worsened after joining the euro zone. The downtrend is extraordinary. 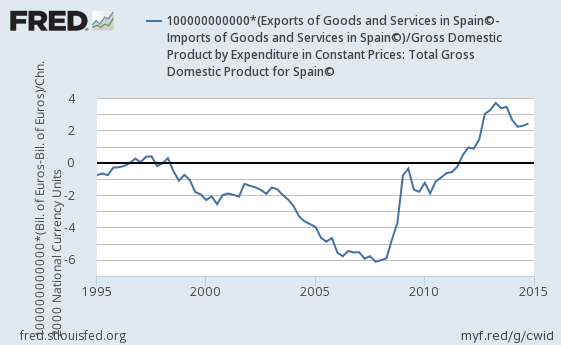 The Greek net exports, the most serious in the euro zone, went even below -10% to the GDP at some point. 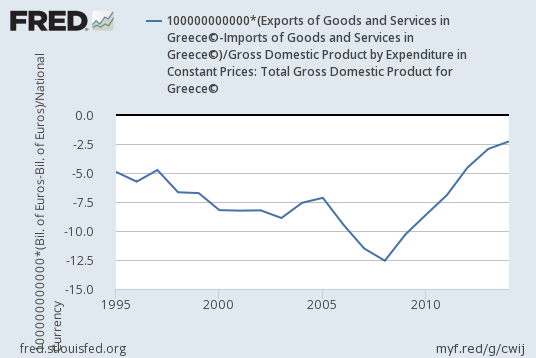 Now the readers can tell why this happened. The cause of the enormous Greek debt was the euro, not the laziness of the nation. Germans, however, have been criticizing the Greek for their alleged laziness, although the economically minded knew the real cause from the beginning.

Interestingly, not only the southern European countries suffered from this. The following is the graph of the net exports in France, the second largest economy in the eurozone: 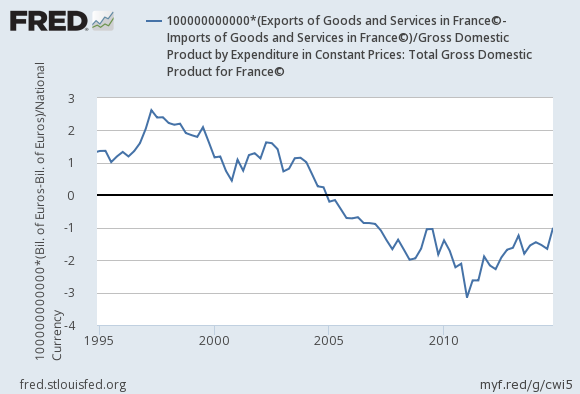 The other side of the scale

Yet, since the exchange rate of the euro is the ‘average’ of the member countries, there must be the country on the other side of the scale that gained enormously to improve its own net exports, as a result of the others’ catastrophic losses.

That country is Germany. The net exports in Germany improved almost to the level of a joke. 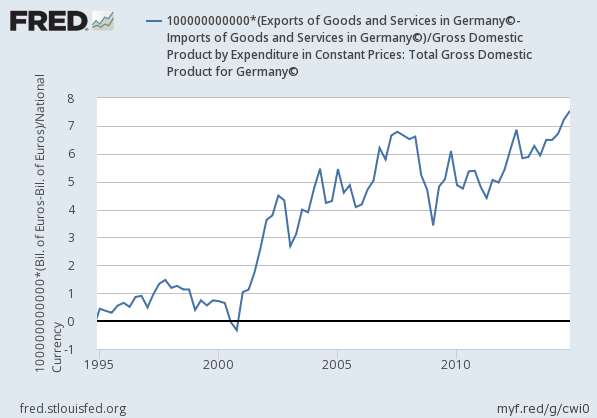 This is the amount that Germany gained at the sacrifice of the other member countries’ deficits. It is 7% of the massive German GDP. They spent this money to realize their own budget surplus, being very proud that this is because Germans are diligent.

The other nations, however, are not observing the situation in the way that Germans do.

Mr Boris Johnson, the British politician who led the Brexit, made it clear to the British citizens, according to the Telegraph. ‘The EU’s “disastrous” failures have fuelled tensions between member states and allowed Germany to grow in power, “take over” the Italian economy and “destroy” Greece,’ he insisted. ‘The Italians, who used to be a great motor-manufacturing power, have been absolutely destroyed by the euro – as was intended by the Germans.’

The anti-EU sentiments do not seem to stop, and there are the reasons to be justified. The bureaucracy, a modern way of colonizing countries, is now at the edge of catastrophic failure. This is also why President Trump is disrespecting the international authorities, restoring national sovereignty.