The US stock market still remains at around the all-time high after the Fed started raising rates, and that is because investors believe, rationally or not, that the strong US economy will keep equity appreciated even without the support of the Fed. However, the US economy will slowdown, and then the stock market will lose its last resort.

Therefore, we again evaluate the major factors that influence the US economy, which are as follows:

The influences of these factors do not arrive simultaneously. Some are already affecting the US economy, and others are yet to come. We shall evaluate the size and the timing of those influences.

The strong dollar has already been affecting American exporters. Since Europe and Canada are the biggest export partners of the US, the Canadian dollar and the euro are the most influential currencies, and both of them have been falling. The following is the chart of CAD/USD: 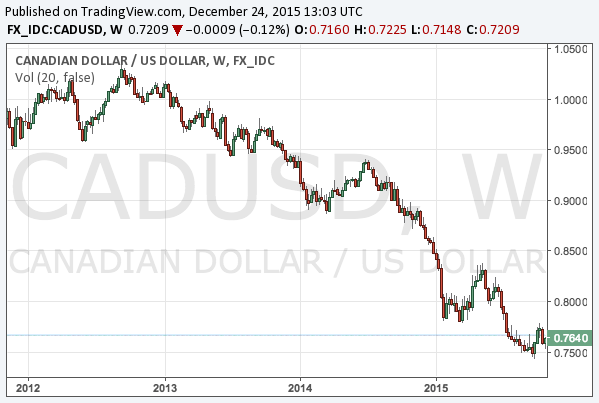 The following is EUR/USD: 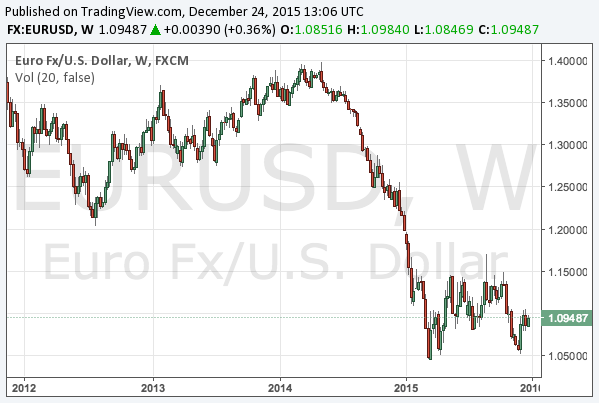 The fall is significant. However, the strong dollar is in itself a cause of the weak dollar, because the strong currency weakens exports, and weak exports devalue the currency. The keyword for 2016 is the reversal of the strong dollar, which will happen at some point where the Fed has to admit it cannot raise rates anymore.

On the other hand, how is the world’s economy doing? The recovery of the euro zone is surely observed but not very significant. The quantitative easing is indeed decreasing the unemployment rate, but the GDP growth is just 1.6%, as Germany imposes austerity. The US and the UK enjoy 2% annual growth.

Considering this insignificant growth is mostly supported by the weak euro, it is difficult to assume the recovery of the euro zone will help the US economy. However, we also assume that the euro zone’s economy will not be weakened immensely in 2016, so the influence on the US economy would be somehow neutral.

The risks are China and Japan, which accept 10% of the US exports. First of all, the slowdown of the Japanese economy is inevitable in a long term. It might show a slight recovery in 2016, but the second consumption tax hike in 2017 will sink the economy. The prospectus is in the following article:

Prime Minister Shinzo Abe seems to be still trying to avoid the decided tax hike, but we may talk about this in another opportunity.

The biggest risk is, of course, the Chinese economy. Ignoring the utterly fictional GDP published by the Chinese government, the electricity generation has been minus for a while, and the train freight transport is -15% year-on-year, which is worse than in 2008.

We reckon that in 2016 the Chinese government will have to significantly lower their expectation of the economic growth, which would upset the financial markets. China and Japan would be the biggest risk to the US exports, although only 10% of the exports are at risk. If we compare, the currency risks would be more influential.

According to this article, the oil price would remain low in early 2016, but it would rebound in late 2016 or early 2017. It would take time until shale oil companies die out. It means that the private consumption might be hurt in late 2016 by the increasing petrol price. On the other hand, in early 2016 the cheap oils would continue to support consumption.

Another important factor for the US economy is wages. As the Fed delayed its first rate hike due to the turmoil in the markets, the unemployment rate has already been quite low for a long time.

Wages are also increasing, and it is likely to harm corporate profits. The symbolic news was that Wal-Mart (NYSE:WMT; Google Finance) lowered their guidance after they decided to raise salaries of their employees. The stock price of Wal-Mart has been falling. 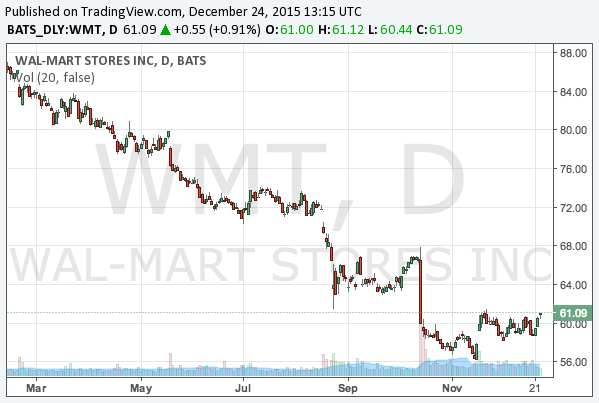 Although a single rate hike would not harm the property market, if rates are raised 4 times to 1%, it would. The markets are currently reflecting 4 rate hikes by the end of 2016, and it means that even if the US economy overcomes the negative factors above, the Fed’s rate hikes will put an end to the US economy in 2017. By then, investors would need to sell the dollar, buy gold and prepare for the timing when the Fed will shift from rate hikes to rate cuts.

The US economy might show a continuous growth in early 2016 supported by the appreciation of the dollar slowing down and low energy prices (except the energy industry), but in late 2016 the Chinese economy’s slowdown, rebounding commodities and increasing wages would harm the economy. The downtrend of the US economic growth would be very clear in 2017 with rate hikes.

In addition, this article only discusses the economic growth and does not assure that the financial market should not collapse before the economy slows down.

We observe too many problems in the markets of 2016.