After the Bank of Japan (BoJ) decided the additional monetary easing on 31st of November, USD/JPY reached 122 once and is now traded around 120. We review if the rate is appropriate from a long-term viewpoint, after the radical depreciation from about 110. 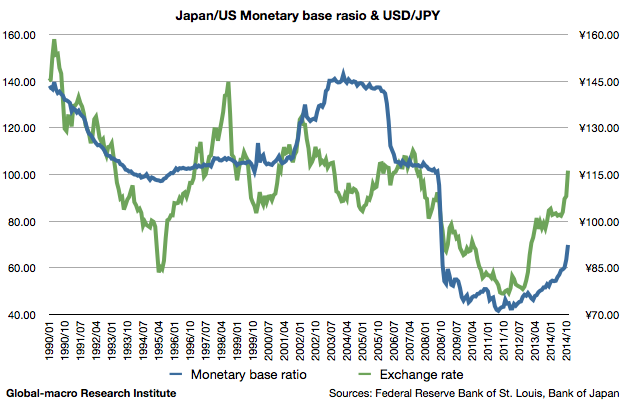 The ratio of the Japan’s monetary base to that of the US, which was once around 50 in 2012, has reached 69.82 as of November, 2014. Since the Fed has already stopped the QE, we may assume that at the end of 2015, the ratio will increase by 30% to 90-100 as long as the BoJ keeps its pace of easing. This is the level of the middle line in the graph, and at this level USD/JPY has historically been traded at around 115.

Thus, considering the difference of the two countries’ GDP growths, the current exchange rate of 120 would be said to be decent or still even cheap to buy. Consequently we conclude it’s likely that the exchange rate will keep being in the range of 112-125 for a while, and eventually aim at 130-140 if the US cut the interest rate in 2015.

If some correction happens in the markets this month, it’ll provide the investors with the good opportunities to buy the dollar. We shall keep our eyes on the currency as well as the CPIs and the trade statistics.