The Form 13F for the first quarter of 2016 has been published, and the portfolios of hedge fund managers revealed.

In the disclosure, Mr George Soros’s Soros Fund Management appeared to have started positions in gold and a gold miner and also to have continued short selling of US stocks as he claimed in Davos in January 2016.

Buying gold and a gold miner

In the filing, Mr Soros’s biggest bet on an individual stock was Barrick Gold Corporation (NYSE:ABX; Google Finance), which chart is the following: 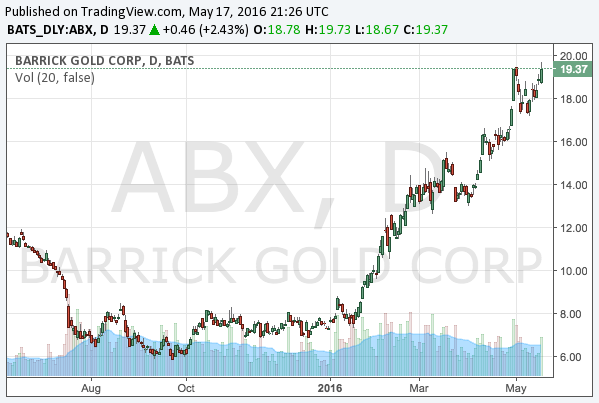 In addition to his position in a gold miner, he also bought call options of SPDR Gold Trust ETF (NYSEARCA:GLD; Google Finance), which is the largest gold ETF in the world. The disclosure this time indeed shows Mr Soros’s commitment in gold investment.

His bullish view on gold is based on his bearish view on the world economy. In the World Economic Forum in Davos in January, Mr Soros claimed that the US economy had already been slowing down, and the problem of the world economy was deflation coming from the slowdown of the Chinese economy. His view has been proven right as the GDP data revealed.

He also insisted that he would be surprised if the Fed was to raise interest rates this year, and that the central bank would eventually cut rates. As gold is a financial instrument that turns bullish when rates are kept low, so gold should be an obvious choice for him.

Many other famed investors agree with Mr Soros on the bearish view on the world economy. The low growth worldwide, more technically called secular stagnation, is the most important theme in the markets of 2016.

Another interesting position that appeared in the filing was his buying put options of SPDR S&P 500 ETF Trust (NYSEARCA:SPY; Google Finance). As buying put options is a bet on a price fall, it means he continues to hold his bearish view shown in Davos, where he said he was short selling S&P 500. 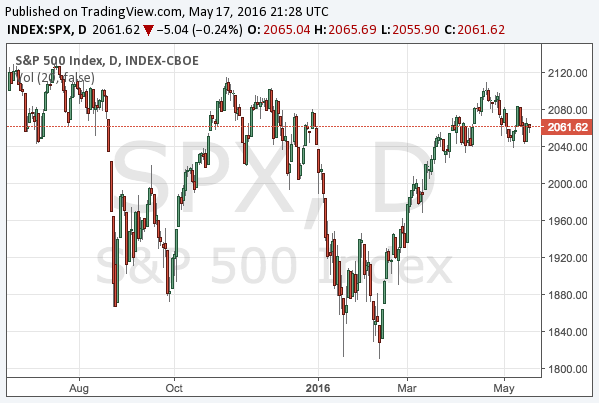 The price level then is also near what it trades now. Therefore it would mean he is expecting the stocks will fall from the current level.

His filing this time revealed his very typical global-macro trades: buying gold and short selling US stocks. The underlying prediction is that the US economy will slow down, and the Fed will cease rate hikes, eventually to resume rate cuts and quantitative easing.

We, of course, agree to buying gold. We recommended to buy gold at the beginning of January. The following was an article on the 6th of January:

However, we have already taken profits from our bearish view on the stock markets, as we explained in the following article:

That was because we were not convinced that the stocks would not go up when the Fed turns dovish.

Mr Soros expects the Fed will eventually ease and short sells US stocks. Does it mean that he assumes stocks would not go up even when the Fed restarts easing, or that stocks must go down once in order for the Fed to restart easing?

With all our positions in stocks already exited, we will then just watch whether or not the great investor’s view on stocks gets proven right. We look forward.