The expansion was not a possibility

The writer was rather surprised at this market reaction, having expected no expansion at this meeting. There were two reasons. Firstly, the unemployment rates in the euro area had been already recovering decently with the current easing, and thus we did not see the necessity of expansion.

Secondly and more importantly, the Fed is expecting a rate hike later in December, so that the ECB has to hold a means to react against a market turmoil that could happen after the Fed’s rate hike. The same logic for the Bank of Japan was already explained in the following article:

What the market’s disappointment means

What is important with this meeting is not what was decided but how investors reacted to it. This time, Dr Dragi failed to fulfill the market’s expectation. As well as the appreciated euro, the European stocks and bonds also reacted negatively. The following is the chart of DAX: 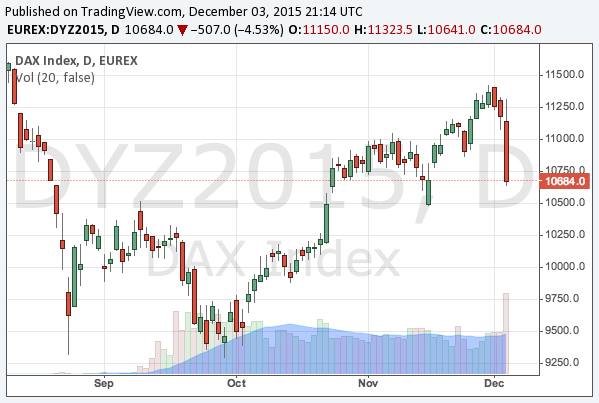 However, we must think that a rate cut is a proper means of monetary easing that would be more than satisfactory in the world before the QE. Yet, now that investors are too much used to the QE, nobody even cares about a rate cut. We are now all drunk with alcohol of the QE, but we would not realize it before someday we become sober again.

We must be vigilant as the markets are too much used to easing. It is not only some good economists but also politicians and central bankers that now realize the markets might not react to easing when the next financial crisis occurs. The market reaction this time is the first step to such a world.

Do you think the equity valuation is not too extreme yet? It would not matter for a bubble to burst. To understand how it would happen, see the following article: