In the EU elections from 22nd to 25th, the anti-EU parties, like Front National in France, enjoyed their victory as the European citizens couldn’t stand with the fiscal austerity that had been imposed to them. Recognising the results, the German prime minister Angela Merkel mentioned the necessity of accepting the needs for more dovish fiscal policies. This is the first step of the true economic growth of the euro zone, which the market has been longing for.

First of all, the situation was that after the bond crisis, the European countries were obliged to follow the austerity rules mainly promoted by Germany and to reduce the government deficit, even though the economic recovery in the euro zone had been far from strong. Nevertheless, the unemployment rates in Europe are still in a serious condition: 10% in France, 12% in Italy, 15% in Portugal, 25% in Spain and 26% in Greece. This is the graph of the unemployment rate and the ratio of the  government deficit to the GDP in the euro zone: 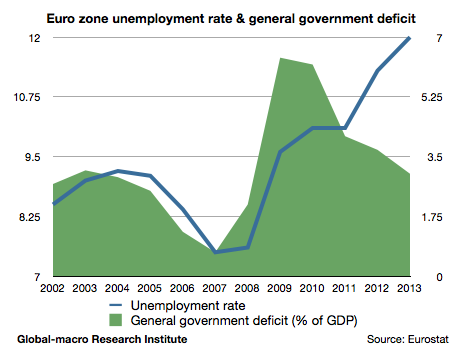 After the financial crisis in 2008, the government deficit was temporaliry raised up to 6%, but thereafter it’s been decreasing despite the rising unemployment rate. Moreover, the monetary base has also been diminishing in this situation: 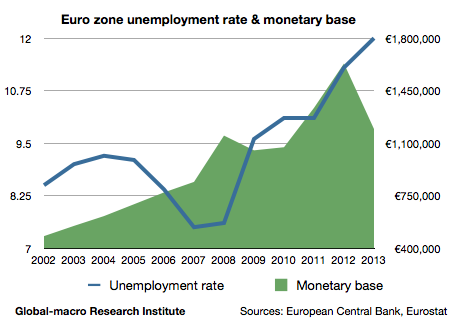 This means the euro zone is tightening the monetary and fiscal policies although the economy hasn’t yet recovered. The demand being limited in the two aspects, the prices naturally fell. This is the graph of the CPI and PPI in the euro zone: 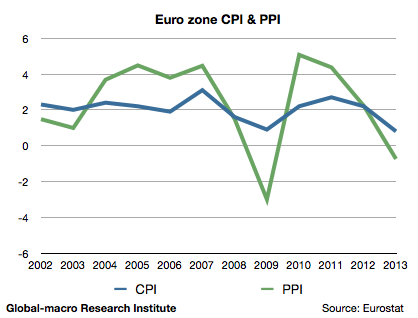 The diminishing PPI since 2010 indicates that it’s influenced by the decline of the government deficit. The minus PPI means the supply is too much. Generally speaking, this is fixed by the following measures:

It’s well-known that the public investment couldn’t stop the deflation of Japan, where the unemployment had been very low, but in the euro zone, where the huge number of jobless people suppress the labour market causing the disinflation, both of the fiscal and monetary policies should work to stop the disinflation. As the currency depreciation would happen with the monetary base expansion, the euro zone could revive the economy just by following the Fed and the Bank of Japan.

According to Reuters, Angela Merkel mentioned that she would accept the policies of the other countries that would promote the economic recovery. This is the very beginning of the genuine growth of the euro zone economy.

This news imply to investors that the European stocks would become relatively more attractive than the expensive American stocks, and that they should more focus on Southern Europe than the advanced economies that have been doing well.

This will also make us move from a scene to buy the property companies of the major European cities to that to buy  the Southern European cyclical stocks. Watching the money flow, the investors would need to keep their positions reasonably adjusted, time by time.