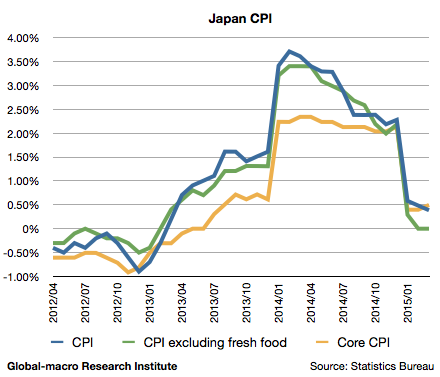 Here is the graph of the Japan’s CPI (Consumer Price Index). As the Japanese government raised the consumption tax in Apr 2014, we need to subtract its direct influence.

This sounds too far from the central bank’s inflation target, but the number is affected by the recent fall of the oil price. The number is a comparison to June 2014, when the oil price was still high. Therefore, in 2016 when we need to compare the number to 2015, the inflation rate should be much more than the current number.

Excluding the influence of the oil price fall

As the core CPI excludes energy prices, it means that the weak demands after the tax hike decreased the inflation rate by 0.1%.

The CPI excluding fresh food was growing by 1.3% back then, so we may guess that if the oil price settles, the rate will be around 1.2%.

This number isn’t too low, but it’d still be difficult for the BoJ to achieve the target of 2% by mid 2016.

The QE expansion/extension by mid 2016 is likely

Therefore, we assume the BoJ will decide further quantitative easing by mid 2016. To narrow the period, we may also suppose they won’t decide the expansion before the Fed decides a rate hike.

The Fed is now very vigilant about how much their rate hike could affect the financial markets, and the BoJ should also be cautious.

If the BoJ decides further easing before the Fed rises the interest rate, the central bank would lose a means to deal with the possible market crash after the rate hike. For this reason the expansion would be after Sep or Dec.

The second consumption tax hike in 2017

Even in case that there is no expansion until mid 2016, they must do further when the Japanese government raises the consumption tax rate again in April 2017. The tax hike in 2014 already damaged the economy quite badly, and therefore, unless the BoJ deals with it, both the CPI and the GDP will be a disaster.

Accordingly, we hold a negative view on the yen in a long term. To evaluate the level of USD/JPY, see the following article: