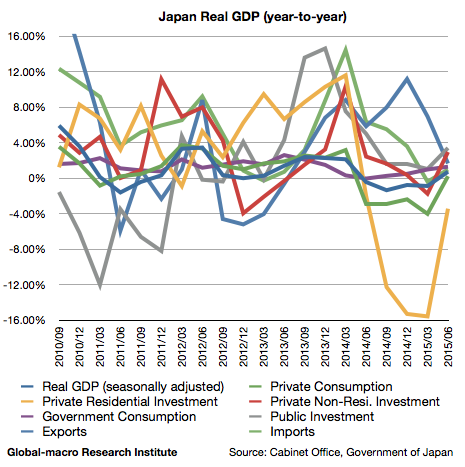 Although the graph shows a rebound except exports, we need to note that the compared quarter, the 2Q in 2014, is right after the consumption tax hike, so the growth should be elevated.

Private consumption grew by 0.02%, which improved from -4.04% in the previous quarter. Due to the weakness of the compared quarter, we assume the actual growth would be around -2%, in the middle of the two numbers. The growth in late 2014 was around -2.5%, so it means a slight improvement, yet the growth is still very weak.

Non-residential investment is stronger than consumption

Non residential investment grew by 2.93%, compared to -1.77% in the previous quarter, turning out to be stronger than private consumption.

Also considering the recovery of the residential investment, industries and risk assets are doing better than households, which is typical of a monetary-liquified economy.

The slow down of exports is significant, because in the compared quarter in 2014 USD/JPY was traded at 100-105, whereas it’s now 120-125. Exports could get weaker as the Chinese economy slows down, and USD/JPY hereafter wouldn’t fall as rapidly as in the last years, as we explained in the following article:

This could also weaken the non-residential investment as exporters are one of the significant factors that drive the investment.

What happens if the Bank of Japan stops QE now? A long-term recession wouldn’t be avoidable, followed by a deflation, which would be also promoted by the tumbling commodity markets:

The Japan’s economic situation really represents the fate of the QE; we must choose between further easing or a recession.

If the QE is stopped, and the economy falls into a recession, the stock market will crash. There is no exit for the Japan’s QE. To avoid such a situation, the Fed is rushing to raise the interest rate:

The global economies are slowing down, and a worldwide deflation is coming. Investors must get prepared for what happens after the worldwide QE.