After much ado, Greece reached an agreement with the Troika of creditors, and investors seem to be convinced that the crisis is over, as the yield of 10-year Greek government bond, which was largely sold before the agreement, went down to 8% from 19%.

Is the Greek debt crisis really over? Is the Greek economy going to recover? Unfortunately, you would know it will not as long as it is in the euro zone, if you are familiar with economics. Germans do not want to admit it. Greeks do not want to believe it.

Why has the Greek debt increased?

In the first place, why has the debt become unpayably huge? Are the Greeks so lazy? We are not going to discuss the nationality here, as it would be unscientific. However, Greece has not always been financially troubled throughout its history, and the current crisis has only continued since 2008. 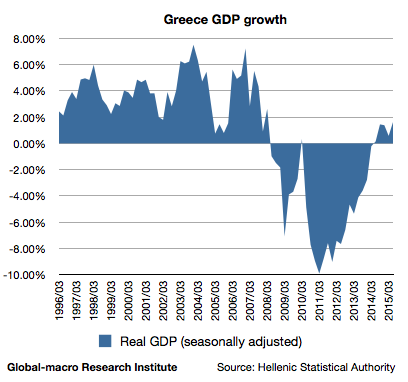 Thus, there should be some reasons that are specific to this period, and in this article we aim to find them out.

2008 is the year when the mortgage loan crisis occurred, and so we observe that the Greek economy could not recover from it as quickly as the other countries did. It was also the case with other weak economies in the euro zone, although Greece was the one that is suffering the most. 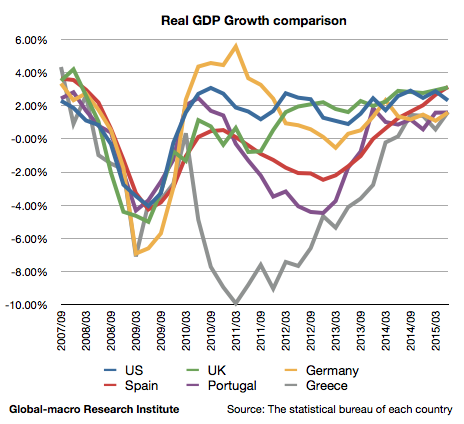 The graph shows that the GDP growths of the weak economies in the euro zone, such as Spain, Portugal and especially Greece, were all much slower than other countries to recover after the crisis.

Therefore, we see that the crisis has to be about the euro zone, not only about Greece. Then, what is wrong with being in the euro zone? Why could they not recover quickly? The cause is the notorious “Stability and Growth Pact”.

The Stability and Growth Pact

The Stability and Growth Pact, which name itself is a joke, is an agreement among EU members to keep annual budget deficit below 3% of the GDP and total government debt below 60%. When the weaker economies in the euro zone went into a recession, they needed a financial stimulus and/or financial easing. However, both of them were not sufficiently granted.

Due to the Pact, the weak economies had to give up the stimulus before they fully recovered. Moreover, as Germany disliked inflation, the financial easing by the European Central Bank was much less than given by the Fed or the Bank of England. 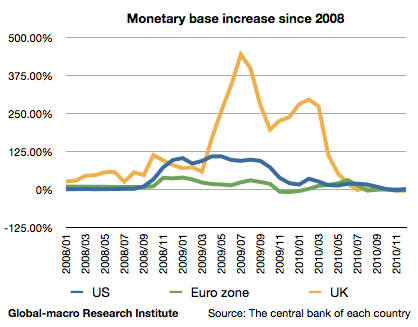 Some of the readers might consider it is not rational that the heavily indebted countries increase their debt further, but they first have to overcome a crisis and then can strive to decrease their debt. Without an income, they are not able to pay. Mr Goerge Soros, a famous hedge fund manager, describes the situation with a metaphor.

“When a car is skidding, you first have to turn the steering wheel in the direction of the skid, and only after you have regained control can you correct your direction.” (Financial Turmoil in Europe and the United States: Essays

Furthermore, the Stability and Growth Pact was once bent and revised in 2005 when Germany and France wanted to increase their debt, but the revision was not allowed in order to save the smaller countries in the euro zone.

The currency and the debt

We also need to note that the euro, the common currency, is the direct cause of the Greek debt.

The euro is the currency that is too weak for Germany and too strong for Greece. While Germany enjoys the increase of its income from exports, Greece has to suffer from the decrease of its income from foreign tourists. This is obviously the cause of the Greek recession, but we also need to recognize this is also the direct cause of the Greek debt increase.

In economics, there is the following equation:

On this equation, national savings are on the other side of trade balance. This means that supposing the investment is unchanged, the decrease in the trade balance becomes a direct cause of the decrease of the figures on the left.

By the way, this also means that the euro is the direct cause of the notable improvement of the German government deficit. Germany may be proud of their own financial strength, but they also need to recognize it depends on the sacrifice of the weaker economies.

The responsibilities for Germany

When a country experiences a financial crisis, its currency dramatically goes down, and it results in the improvement in exports to help the troubled economy. However, the euro does not go down for the sake of one or two small economies in the area, and this makes the sufferings of the weak economies continue forever.

If you do not allow Greece to exit from the euro zone, we only have two solutions. One of them is that the strong economies cover the debt of the troubled economies; to do it efficiently, the answer will be the euro bond.

This can be easily justified. As we explained, the financial strength of Germany depends on the sacrifice of the weak economies, and then Germany is responsible to help them out. However, if they are not willing to do it, we have another solution.

We suggest the strong economies in the euro zone to start investing in the weak economies. This should be politically easier than totally covering the debt itself, and will solve the problem possibly in the fairest way.

Yet, the German politicians would not understand this kind of logic. It is always extremely difficult to make politicians understand economics. Consequently, we expect the Greek crisis to come again within several years. For investors there will be a good opportunity to short sell the Greek bonds. It is very unfortunate but also inevitable.

Financial Turmoil in Europe and the United States: Essays