On the 29th of October, the US Bureau of Economic Analysis published the US GDP data of the third quarter of 2015, revealing the US economy grew 2.03% (year-on-year). This means the economy slowed down from the second quarter, in which it grew 2.72%. The following is the chart of the US GDP growth and its elements: 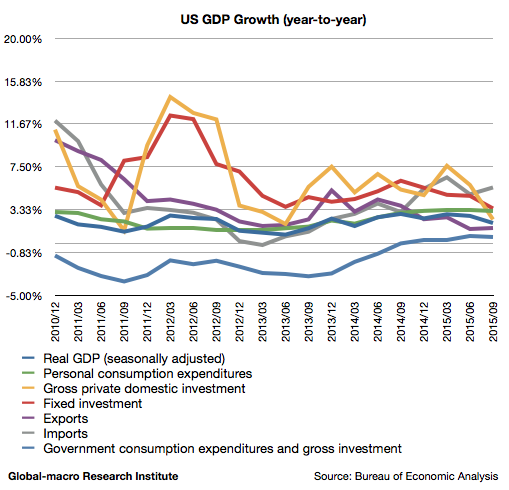 From the graph we observe the investment is the one that slowed down the most. The strong imports are also a minus to the GDP growth, although it might imply the domestic demand is still alive. We look into each factor closely.

The personal consumption is still strong

The personal consumption grew 3.21%, comparing to 3.26% in the previous quarter. The growth has been slightly more than 3% for one year. 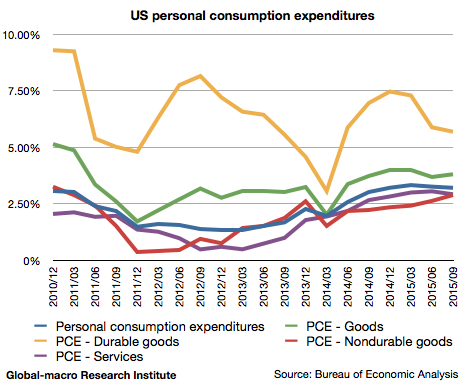 Durable goods continue to slow down, while non-durable goods accelerated. This might be because the improvement in the labour market enabled low-paid workers to buy more small things, although more pricey products slowed down.

The personal consumption did not decline further than the entire GDP. The cheaper petrol might be supporting the consumers’ demand.

The rents and house prices continue to increase, which we assume could be negative for the consumption.

The clear slowdown of the investment

The fixed investment slowed down clearly. The growth was 3.44%, comparing to 4.67% in the previous quarter. 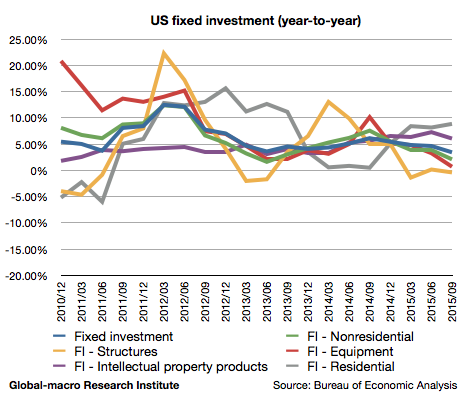 The significant growth of the residential investment, 8.86%, could be boosted by the low interest rates.

The growth of the equipment investment slowed down to 0.70%, which is near zero. Comparing to the relatively good figures of the personal consumption, the slump of the corporate side of the economy is obvious. One of the causes is, of course, the oil price that affects energy firms’ investment, but another cause we assume is the strong dollar that hinders exporters’ activities.

Exports and imports both accelerates

The most important and implying figures this time are the exports and imports. The strong dollar obviously accelerated the imports to 5.49%, comparing to 4.82% in the previous quarter, and more significantly the exports also slightly accelerated to 1.50% from 1.47%.

Despite the strong currency, the exports of services impressively accelerated. Meanwhile, due to the commodity slump, the export of goods finally grew negatively.

This implies whilst the energy companies suffer from the low oil price, the IT industry grows more strongly than the negative effect of the currency appreciation. In this situation of the global markets, investors need to invest in such industries.

On the other hand, the growth of the imports, boosted by the strong dollar, is undoubtable. Considering all above, we are now able to conclude the observed trends.

We conclude that the US economy is still growing after the massive quantitative easing was over, although it is suffering from the strong dollar and the collapse of the commodity markets. As the Bank of Japan and the European Central Bank are still keeping their policy very loose, and the US economy no longer has the booster of the QE, we assume the growth of the US economy will gradually get absorbed by other countries.

Investors and analysts have been worried that the strong dollar might harm the growth, and we observe the time is approaching near us. Investor who own dollars would need to reconsider their positions.

On the other hand, the recently published UK’s GDP slowed down likewise, and therefore there is no major currency that can be purchased in the currency market. In this kind of situation, we are supposed to buy gold, but it is also difficult as long as the Fed is insisting to raise rates.

Money does not know where to go. Consequently, the US stock market has been moving exactly as the “Bond King” Bill Gross predicted. The financial markets will continue to be difficult.