On the 16th of November, the Cabinet Office of Japan published the GDP data for the 3rd quarter of 2015. The real GDP grew 1.08% (year-on-year) during the quarter, revealing that the economy slightly recovered from the negative growth after the consumption tax hike in 2014.

To compare, the growth for the previous quarter was 1.00%. We look into the details of the numbers. 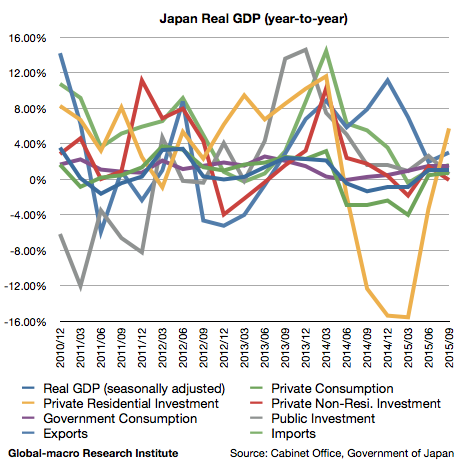 The private consumption is still weak but recovering

The private consumption grew 0.74% during the quarter, compared to 0.46% for the previous quarter. This might not be strong enough to be convinced with the recovery, but we can at least observe the economy is not catastrophically hurt.

However, if we see more in detail, the consumption of households grew 0.71%, whilst the figure without imputed rents is 0.62%. This implies low interest rates brought by the quantitative easing are supporting the figure, and the real consumption is slightly weaker.

Although the Japanese government urges industries to invest further, it is naturally a horrible idea to invest when there is a deflationary force in the economy. Deflation means too much supply, and then if a company tried to build more factories to supply more, it would obviously result in loosing money.

Meanwhile, the significant recovery of the residential investment shows the QE is working on the property market, while the rest of the economy is still struggling.

Trades became more active due to the weak yen

As the writer was pessimistic about the Japanese economy, the growth of 1.08% was personally a positive surprise. If the depreciation of the yen continues, and the financial markets do not collapse, Japan might show a decent growth in 2016, but the next consumption tax hike in 2017 will ruin everything again.

Hereafter, Japan and the US both have their own reason why the economy cannot grow rapidly, and therefore it would be difficult for the stock markets to go up without a reason but financial easing.

However, there will not be financial easing in the US, so the investors should consider whether or not the Japanese stocks can go up without a bull market in the US stocks. A slowdown is the issue all over the world.