Japan’s GDP data for the 4th quarter of 2015 was published, revealing that the real GDP grew 0.66% (year-on-year), slowing down from 1.65% for the previous quarter. 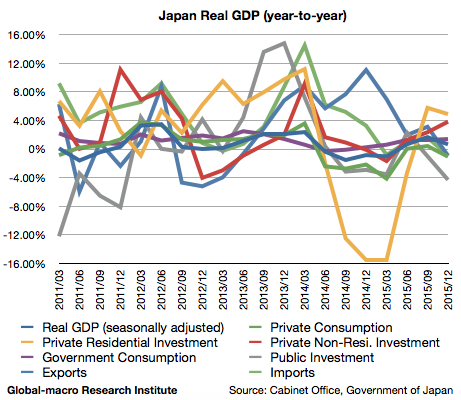 The chart obviously shows the consumption tax hike in Apr, 2014 ruined the uptrend after Abenomics. We will review the elements of the GDP, which indicate more about what is actually happening in the Japanese economy.

After Abenomics started, the consumption had been performing well until the consumption tax hike ruined everything. To analyze the structure of the downtrend now, we recall what was the driving force for consumption before the tax hike.

We assume it was the high asset prices that promoted the consumption of the rich. After Abenomics, the stock price became double, and department stores were fulfilled with a lot of rich people who got money. However, what happened in the last quarter of 2015? The following is the chart of Nikkei 225: 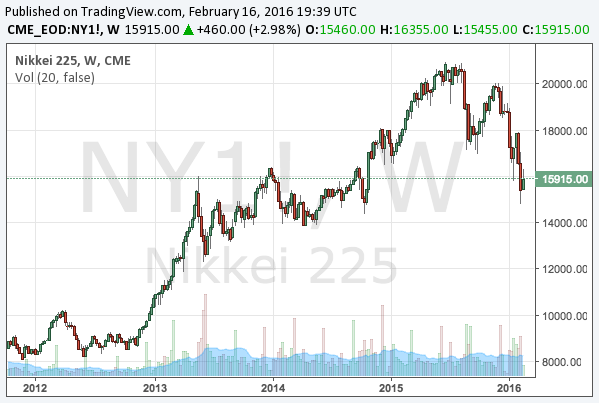 As you can see, the quarter was when most people recognized the trend had surely changed in the stock market, and then there is no wonder if the rich decided to spend less to see what further would happen to their assets.

Unfortunately, this implies that 2016 would be a very difficult year for the Japanese economy. We will explain it after we review exports.

The growing residential investment is obviously as a result of the low (or negative) interest rates driven by the quantitative easing. Negative rates introduced in January, which did not work for USD/JPY, should nevertheless work for mortgage loan rates, and thus the relative outperformance of the property market should continue in 2016.

Yet as long as consumption sinks, investment must eventually follow, as the end users are always consumers. The only other outlet is exports. Then how are they performing?

Both exports and imports grow negatively

While the weak imports suggest the weak demand in Japan, just as the weak consumption did, the weak exports suggest one of the two driving forces of Abenomics are going to vanish. The yen has been quite strong after investors turned bearish for the global markets.

As we explained, the other was the high asset prices that drove the consumption of the rich. Due to the market turmoil, we recognize that both of the stock rally and the yen depreciation could be difficult in 2016. Then what can we expect from Japan this year? The GDP data suggests that the future would be very dark for the country of the rising sun.