After the radical crash in 2015, the WTI crude oil price has been trading around $30s, and many try to forecast how long it will remain low.

The prospect of the crude oil price depends on the two factors: the OPEC and the US shale oil industry. Whilst the OPEC now tries to cooperate to freeze production, Saudi Arabia is still unwilling to cut its output.

Then what about the US shale industry, which Saudi Arabia tries very hard to kill? They surely have larger costs for production, and then it would be them that would die out if low oil prices continue.

The shale oil companies published their earnings releases in February, and this article is examining the results. Are they cutting production? Are they close to bankruptcy? These factors will be necessary to know in order to foresee the future of oil prices.

We review the earnings releases for the last quarter of 2015 of the following firms:

As most of the shale oil producers are already making losses, we simply discuss the following two issues:

The following is the long-term chart of the WTI crude oil price. It has been tumbling, and generally speaking, the lower price tends to decrease the supply. 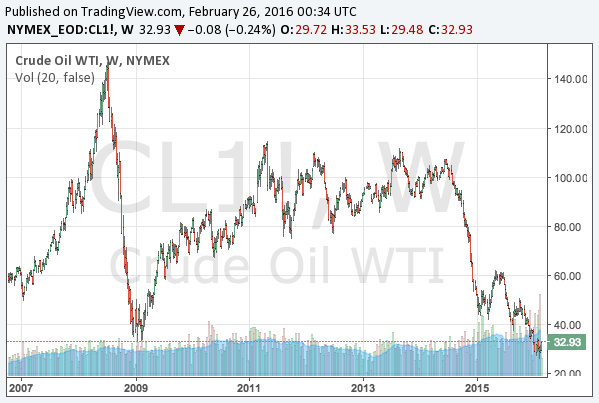 The production not decreasing

As we saw, the oil price fell from $100 to $30, but according to the earnings releases, the shale oil companies are not cutting their outputs. The following is the year-on-year production growth of the five companies:

Although the oil price is more than the production cost, they are making losses. This is because of the depreciation or amortization of the preceding investment. Yet given that the investment has already been done, and the equipment already exists, they have to continue or even increase production to pay back the debt. This is what they are doing.

By the way, out of the five firms, Chesapeake Energy seems to be cutting production of both oils and gas. However, this is actually a result of sale of the equipment, as they desperately needed cash to pay back their debt. The “property and equipment” on their balance sheet decreased to $14 billion from $33 billion at the end of 2014.

Then what happened to the sold equipment? Of course, the purchaser is using it as it produces oils at a still reasonable cost.

Investors must note that bankruptcies of the shale oil firms, if they happen, do not immediately mean the termination of oil drilling, as the equipment will be sold and used by the purchaser. Efficient wells are more likely to be rested when they are bought by financially more stable companies, but it would not dramatically and immediately change the oversupply of oils.

Will they go bankrupt soon?

Then, how about their finance? We see how fast their cash is running out in the following chart:

The one closest to bankruptcy is Chesapeake Energy. The cash flow is negative, and it has more current liabilities than current assets, so it would be forced to sell more assets in the near future. The cash flow for 2016 is likely to be more than the shareholders’ equity, which means it could likely become insolvent this year.

On the other hand, the other four firms are likely to survive 2016. The shareholders’ equity is enough, and the current ratio is decent. The cash flow would be negative this year, but they are still not close to bankruptcy.

Furthermore, even bankruptcy does not immediately mean production cuts, so the oversupply of shale oils would be likely to continue longer. The earnings releases of the shale firms indicate low oil prices might continue for a long time.