As we have been analyzing the crude oil market from several aspects, we would like to summarize our predictions in this article.

The oil price has been tumbling since 2014 due to the oversupply by the US shale oil industry. The following is the chart of WTI crude oil futures: 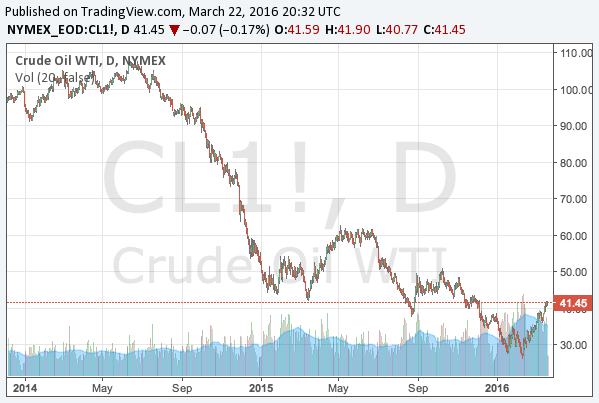 The shale industry has made it possible to extract oils that could not be extracted in a conventional way, and consequently the supply of oils immensely increased. Now even oil tankers are used as storage.

However, OPEC countries such as Saudi Arabia refused to cut production to support the oil price. Production cuts mean a decrease in sales. The US shale industry, on the other hand, does not even have an organization like OPEC to cooperate for production cuts.

The possibility of bankruptcies

Are they going bankrupt soon? We have reviewed the earnings releases of the shale oil companies.

According to the releases, although they are making losses, they are not so close to bankruptcies. Even Chesapeak Energy (NYSE:CHK; Google Finance), the most troubled, has funds to survive approximately one year. Others even have more funds that could be enough to survive multiple years.

So, what do these mean for the oil price? We first look at the chart again.

The shale oil companies had not been making losses until the end of 2014. This means their break-even point should be around $70 or lower, considering their recent efforts to cut down costs.

$60s is the top of the range in 2015. If the oil price remains at this level for a long time in 2016, it means that the companies will have a better year than 2015, in which case Chesapeake Energy might possibly survive until 2017. This means no bankruptcy in 2016 and thus no significant decrease in production.

Consequently, we may say $50s would be the possible highest range in 2016. So when the oil price is in $40s, we may start making a position by selling call options to bet the price will not go higher than $50s. If it exceeds $50, simple short selling would also work. For those who are not familiar with options, please read the following article:

The writer already started selling call options when the price was in $40s, and will add more positions if it goes even higher.

The bottom of the oil price

On the other hand, for the bottom both of the US shale industry and OPEC are involved. According to the shale companies themselves, their shutdown point (the production cost excluding investment) is around $10s, so they would be in trouble when the oil price remains in $10s for a long time.

Likewise, OPEC countries would also be in trouble with the oil price of around $20. Small states such as Venezuela are already suffering with the price of $30 or $40, but with $20 even Saudi Arabia would start to face fiscal difficulties. So in both senses, we conclude the bottom should be around $20.

Therefore, we consider the price range of crude oils in 2016 will remain between $20 and $50s approximately, and we sell call or put options as the top or the bottom come close, in which way we earn profit when the price remains in the range.

The oil market in 2016 is very volatile, so we would not deny the possibility of breaking the range for a short term, but in such a case we would buy or short sell rather than selling options.

We also warn that depreciation of the dollar is one of the themes in 2016, and it could relatively elevate the oil price, but it would be better to hedge that risk in other asset classes, by, for example, buying gold.

The greatest part of the global-macro strategy is that different positions in the portfolio adjust each other’s risk automatically. 2016 is a difficult market, but we also believe that it can be quite profitable for global-macro investors.