In the first quarter of 2016, Japan’s real GDP grew -0.05% (year-on-year), slowing down from 0.85% in the previous quarter. This is the first time since 2013 for Japan’s economy to grow negatively, excluding the four quarters after the consumption tax hike. 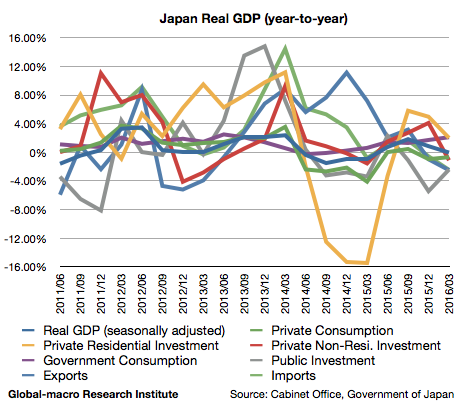 Personal consumption grew -0.69%, compared to -0.96% in the previous quarter. The symbolic affairs for this figure would be the rich Japanese who buy less in department stores as the stock market goes down or the decreasing number of Chinese tourists due to the recently strengthening yen.

This trend would never get alleviated and would even worsen, as USD/JPY is expected to go down further as the US economy slows down.

This is an article from last year, when nobody doubted the strength of the US economy, but it is increasingly proven that our view was right.

This tendency will weaken USD/JPY and then the Japanese economy. The slowdown is infectious.

We consider the number of residential investment as the most alarming, as the property market should have the greatest advantage of low interest rates, the only economic driver that is now left for the Japanese economy. If the property market sinks, everything else in the economy will also be sinking.

Non-residential investment should have been affected by the exporters that would hesitate to increase investment due to the strengthened yen. Both of the numbers reflect the influences of quantitative easing, although the implications are both negative.

The decelerated exports are obviously subject to the strengthened yen, whilst the weakened imports despite the strong yen are symbolic of the weak demand in the economy. Although weak imports increase the GDP, we consider both of these numbers as bearish for the economy.

The data this time should be enough to conclude the failure of Abenomics. The economy temporarily recovered once, but it was only because the weakened yen boosting exports, and thus everything is over as the yen retained strength.

This is not only about Japan. Japanization of the advanced economies are ongoing, and thus even the US will eventually slow down to Japan’s level. This phenomenon is called secular stagnation, and hedge fund managers have already started their bet on it.