As the Fed remains unclear about when it raises interest rates, the investors are starting to doubt the Fed’s will for a rate hike. The doller is getting weak, and the gold price rebounded.

As we explained in the following article, the Fed is not waiting for the further improvement of the labour market, but we estimate its aim is the depreciation of the stock market itself:

This assumption implies the Fed might cease to raise rates this year, and it would have a certain influence on USD/JPY.

The US stock market decides the timing of a rate hike

What is the most important is that it is neither the unemployment rate nor the inflation rate but the stock market that decides the timing of a rate hike. The Fed fear that a rate hike could trigger a collapse of the QE-fuelled financial markets.

We should recall that Fed Chair Janet Yellen mentioned in May that the equity valuations are quite high and have potential dangers (Reuters). She did not randomly make the markets volatile, but we should consider she had an intention.

Then, what asset class will be decisive? As the bonds are appreciated during the recent turmoil, it should be stocks that the Fed is carefully watching. Consequently, a rate hike depends on the future move of the following chart:

The Fed would aim that this chart will continue to moderately go down. Therefore, as far as it is moderately going down, the Fed would not raise interest rates. On the other hand, if the stocks fall too rapidly, it would consider to withdraw its plan to raise rates.

Regarding the BoJ’s next move, it would be difficult for it to expand the QE before the Fed’s rate hike. The BoJ already purchases the government bonds almost maximally and have little room for further easing.

What the BoJ fears the most is a turmoil after the Fed’s rate hike, and therefore it would consider it wants to keep a means to ease further in case of it. It could consider it if the Japanese stock market collapsed, but the current plunge is too little for it and far from a total crash. 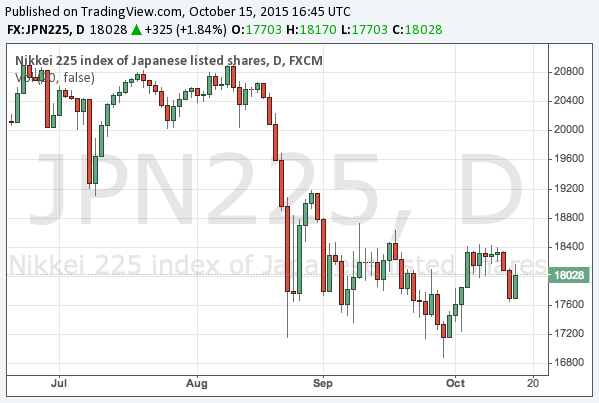 In this situation, the most effective investment strategy would be, if you already have USD/JPY, to sell a call option of the currency pair. You would gain a profit from the option if USD/JPY does not go up for a few months.

If you want to know the exact timing of the Fed’s rate hike, we would say it is impossible. We do not know, and even Dr Yellen would not know. Everything is up to S&P 500.

The current turmoil might be tough, but it will be definitely tougher next year. We advise investors to be vigilant, according to our view.