In 2016, the Fed is trying to raise interest rates. The US economy is actually starting to decelerate, but the Core CPI (excluding food and enegies) is edging higher. If this uptrend is long-term, the Fed might be forced to rush for rate hikes undesirably.

Will that happen? Is the US economy going into stagnation? In this article we argue the outlook of inflation in the US and its influence on rate hikes, the stock markets and the gold price.

The CPI and the Core CPI

Firstly, we review the current situation of the inflation in the US. The following graph shows the CPI and the Core CPI: 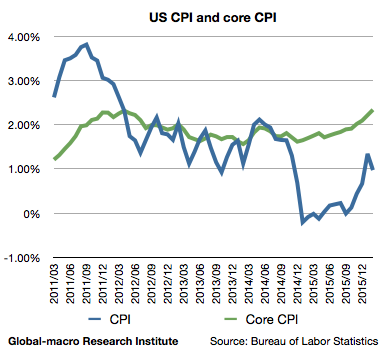 The CPI appears to be decelerating as the oil price has been tumbling in a long term. On the other hand, the Core CPI is edging higher, already exceeding the Fed’s 2% inflation target.

Out of the two indices, which should we believe? The real one is the Core CPI, as the oil price is expected to form a long-term bottom in 2016.

Then, is the inflation going even higher than 2% continuously? Will the Fed be forced to rush for rate hikes? To conclude, we need to look into the situation more deeply.

If you have followed the recent affairs in the US economy, inflating services are easy to comprehend. The main cost of a service is a wage, and the rise in minimum wages has been a trend in the country. In 2015, Wal-Mart (NYSE:WMT; Google Finance) disappointed investors with its low profit due to the increasing wages.

Meanwhile, the US economy is starting to slow down. The wages are inflated due to high minimum wages, but the economy is suffering.

This is therefore cost-push inflation. High wages are suppressing the economy.

If that is the case, we should look into wages. Labour compensations in America had been accelerating until March 2015 yet then slowed down. The following is a chart comparing the Core CPI and the labour compensation:

In an example in 2011, we observe wages peaked out first and 10 months later the Core CPI slowed down. Regarding the recent data, labour compensations already hit a top in March 2015, and thus we expect the Core CPI will peak out during the spring. As the economic growth and wages slowed down, the rise in the Core CPI can hardly last.

Why are wages slowing down?

Then why is the labour market slowing down? We presume it was the Fed’s quantitative easing that fuelled the labour market, and the Fed already terminated QE and started to raise interest rates. Mr George Soros also insisted in Davos that QE worked against deflation, although negative rates would not.

Therefore, if wages continue to slow down, the inflation will slow down, and the only option left for the Fed would be to restart QE. There will not be enough room for rate cuts either.

The Fed as well as I would need another couple of months to see if the slowdown of wages is a long-term trend, and thus the central bank would wait at least until summer.

The federal funds rates futures, by the way, currently expect no rate hike in 2016, which we consider as too dovish. We assume one or two rate hikes are still possible, although it would harm the economy even seriously.

The challenge for gold investors

Mid 2016 will be a challenge for gold investors. The Fed could raise rates, and as long as the market expects no rate hike, it would surprise the market.

However, rate hikes will completely kill the growth of the US economy, and then the Fed will be forced to cut rates and restart QE, and gold will eventually be a bubble.

The stocks would be in a subtle situation. Inflation is positive for stocks but corporate profits would not grow. The recent market moves represent this subtlety, and for that we should say Mr Bill Gross was right about the stock markets.

Why are we so pessimistic? That is as we consider the advanced economies are in secular stagnation, where the structural deflationary force governs everywhere in the world.

Mr Soros said the key issue in 2016 is deflation. We agree to it.