The crude oil price is surging even after the disagreement in the oil producers’ meeting in Doha, but it will try its bottom again soon. The only thing that has changed in the oil market is the price, and the long-term oversupply of oils would not change as nobody is willing to cut their production. 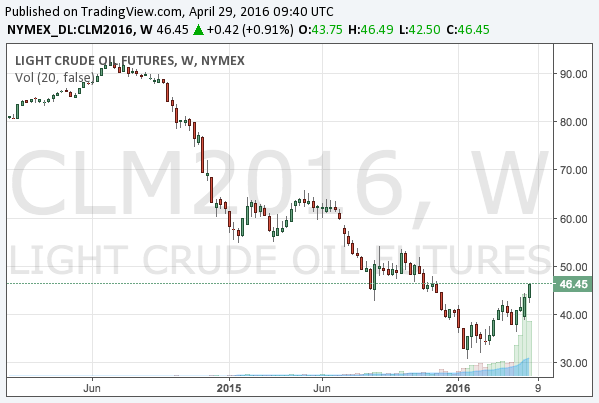 In the long-term chart, the oil price seems just trying to recover after a radical fall. Is this so-called a dead-cat bounce? We presume so and will explain the reasons.

The supply of oils

First of all, we need to remember that none of the oil producers have a will for output cuts or have dropped out of the competition. The non-US producers such as Saudi Arabia and Russia reportedly failed to agree even on an output freeze, not a cut, in the Doha meeting.

Then why is the oil price surging? The reason is that the oil production in the US seems to be declining, for which investors are assuming the shale oil industry has finally started to give up production due to the low oil prices.

Then we must see how the production is actually going in the US. The following is the chart: 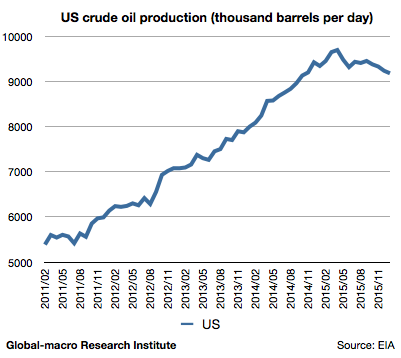 Moreover, this is just the number in the US. Other countries such as Saudi Arabia and Russia are as explained above, and Iran, which just went out of the sanction this year, is indeed under the process of increasing its production.

How can such a situation justify the rebound of the oil price from $30 to $46? In addition, the US shale industry is still very much alive, as we reported when they published their latest earnings release.

As explained in this article, most of the major shale oil companies have sufficient funds to survive a few years, and even Chesapeake Energy (NYSE:CHK; Google Finance), the most troubled among them, has cash to likely survive 2016.

Therefore, if the oil rebound continues, the shale oil industry will try to retrieve its production. It is natural as nobody has gone bankrupt or dried out their well. They are going to publish their earnings release for the first quarter of 2016 in May, and we are also going to report it here.

The top of the oil price

Then, where would be the top of the oil price? Our prediction has not very much changed since our latest forecast.

In this article, we estimated the top of the oil price in 2016 would be around $60, according to the supply level and the production cost. This means in $40s we can start selling call options (which will make a profit when the price does not go up), and in $50s we can start short selling.

So the writer has been selling call options at the moment and will short sell if it goes up further.

Will it go up? It would depend on how quickly the investors would realize that the oversupply has not changed, but the range around $55 would be a very good point to short.

As we have just closed our positions in the stock markets successfully, if the oil price goes up there, it would be one of our very few large positions in the markets at the moment in addition to gold.

We assume gold is sufficiently profitable for our trading in 2016, but it would be better with more opportunities. We await irrationality in the markets to short.