The GDP data of the US economy for the first quarter of 2016 is published, and the real GDP growth turned out to be 1.95% (year-on-year), slightly slowing down from 1.98% in the previous quarter. 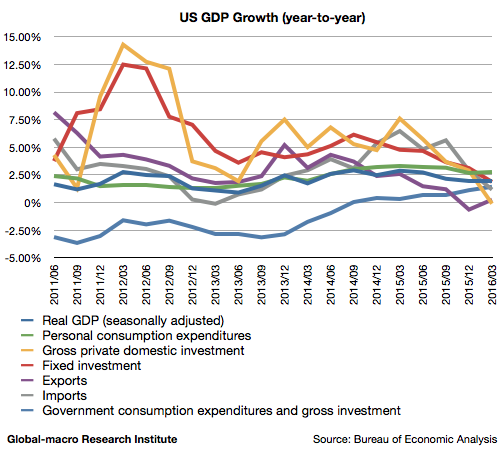 As the economic growth in mid 2015 was greater than 2%, the figure indicates the economy has decelerated after the Fed ceased quantitative easing.

What is symbolic in the data is that the only element that performed well was residential investment, suggesting low interest rates are artificially supporting the US economy.

Consumption not great despite cheap petrol 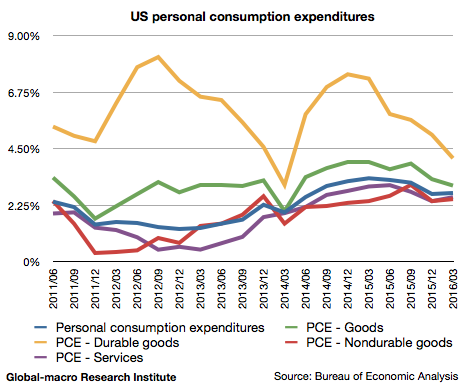 The biggest problem in consumption is that it is not very strong even though cheap petrol should have given financial flexibility to consumers. Mr George Soros also pointed out this fact in Davos in January, insisting consumers did not spend money expecting prices would be cheaper in the future. Deflation looms.

Regarding the oil price, although we do not expect it to skyrocket in 2016, it could not become much cheaper than in this quarter.

The most relevant proposition here is what would happen to consumption if the oil price is about to rebound, although it did not perform so well even with cheap petrol. This is not only true in America but in all the advanced economies. 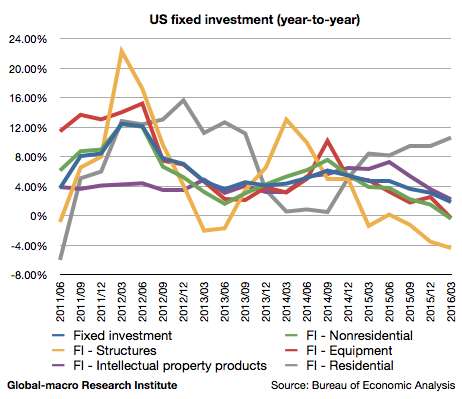 We presumed it could be because of oil firms decreasing their investment, but intellectual properties also slowed down. It could mean American companies are not performing well, presumably because of the global economy slowing down.

On the other hand, as is symbolic in the chart, residential investment accelerated despite all the other figures decelerating. This clearly means the US economy is supported by high asset prices provided by low interest rates.

Then what would happen without the support of the monetary policy? The advanced economies including the US surely is in secular stagnation, as Dr Larry Summers insists, where the economy is destined to slow down. Secular stagnation is the most important theme in the markets of 2016. 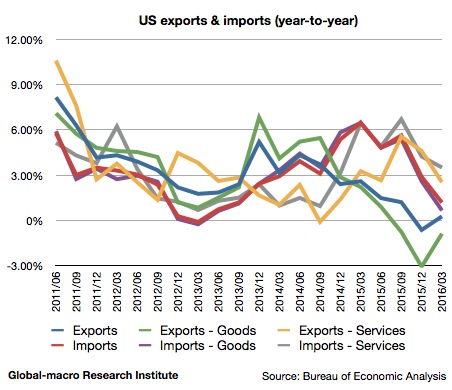 Is this because of the dollar depreciated during the quarter? It would be too quick for the currency market to influence the economy, but in either way the weak dollar will eventually lift exports and hinder imports.

Considering the fact that it was trades and residential investment that supported the GDP in this quarter, the economy is indeed unable to perform well without the support of the monetary policy. This is true in any advanced economy, and the result would be that currency devaluation would internationally continue, and all the economies would just sink together.

Personal consumption will decelerate further as the oil prices rebound. The slowdown in fixed investment was more severe than expected, implying American industries are not performing well. Trades will be subject to the worldwide economic slowdown.

The US economy is already slowing down as we predicted in the article in December 2015. It was even faster than we assumed.

The world’s economies are obviously subject to secular stagnation, which investors must understand very well for the markets of 2016.

What should we invest in with the weak economies? Gold. We were also right to buy gold in January.